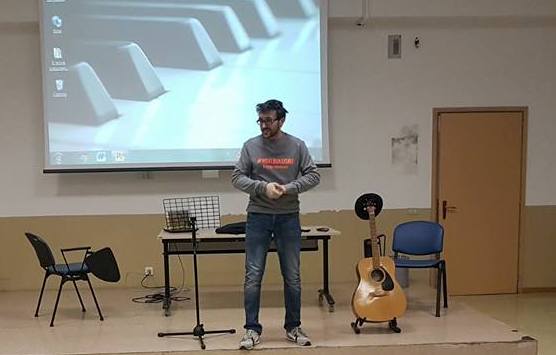 Salvatore Lanno, born in Sicily adopted to Milan, Salvatore Lanno graduated in saxophon studies at the Trapani conservatory of music A.Scontrino and in music education at the G.Verdi conservatory in Milan. In 2012 he founded an association named “La Piccola Orchestra” (The Little Orchestra) that he currently leads as President. He is a freelance journalist, member of the Order of Publicist Jounalists of Lombardy and editor in chief of the newspaper “Sapendo Leggendo”. In 2011 the publishing house Sovera Edizioni issued his first book “Il ricordo del 9” (Memory of 9), while in 2013 his second published work “La vita di tutti noi” (Life of us all) got published by Aracne Editrice. In 2017, thanks to his first fable “Il leone prepotente” (the bully lion), he started a round of meetings called “Qui si reagisce o si perisce” (Weather you react or you perish). The fable got issued by LFA Publisher, that declared Salvatore author of the year for having tackled the topic bullying in several Italian schools. In 2018 LFA Publisher issued a collection of poems/tautograms entitled “Il gioco poetico delle lettere” (the poetic game of letters). His current round of meetings called “Appuntamenti sparsi” (scattered appointments) aims at promoting creative writing and the principle of legality among scholars. Salvatore Lanno is also President and founder of the Concorso Nazionale Letterario “Artisti per Peppino Impastato” (literary and national contest “Artists for Peppino Impastato”).